The election outcome was broadly in-line with our expectations and doesn’t change our fundamental outlook on the economy or markets.

This was no typical U.S. midterm election, as voter interest hit record levels — certainly catalyzed by high levels of campaigning and increasingly polarized parties. As an example of heightened engagement, early voting by younger voters appears to have surged from 850,000 early voters under the age of 30 in the 2014 midterm cycle to more than 2.3 million this election. Going back to 1930, the incumbent party has lost a median of 30 seats in the House of Representatives in the midterm, so the Democratic gains have precedent but the magnitude of the eventual seats gained is still being determined. The Republicans have increased their slim majority in the Senate, giving them some breathing room on contentious issues going forward. Finally, the Democrats picked up at least eight state governors.

The ﬁnalization of the vote tallies won’t change the primary outcome of the election at the federal level — change in control of the House to the Democrats. Our view that the election is unlikely to be a major market or economic event was based on an expectation of very limited legislative achievement over the next couple of years. This outcome increases those odds, as the House and Senate will struggle to ﬁnd common ground on items of major signiﬁcance such as taxes, infrastructure or health care. Leadership of the House committees switching over to the Democrats transfers oversight and investigative powers, but careful political calculation will be required to avoid overreach. Republican Senate control will facilitate the continued approval of federal judges that are central to the Republican agenda. Importantly, the election may have little impact on reducing U.S./China trade tensions as President Donald Trump’s administration is leading this charge and Congress has shown little interest in intervening.

All in all, we expect the outlook for the markets to be much more dependent on the growth and inﬂation outlook over the next couple of years than on political developments. With this report focusing on the election and its implications, we look to history for some clues about prior market performance in this environment. As shown in Exhibit 2, the best market returns since 1946 have occurred with a Republican president and uniﬁed Republican Congress (although this only existed for seven of the 72 years, so its statistical signiﬁcance isn’t high). Conversely, a Republican president in a split government situation (either split Congress or Democratic Congress) has generated the lowest returns. This is also true when looking at the results of the current election — a Republican president with a split Congress has generated the lowest returns of any of the possible combinations over this period.

Another favorite of market historians is the presidential cycle, which has shown the historical pattern of the economic growth and market returns during a president’s term. Typically, economic growth and market returns have peaked in the third year of the cycle, with the theory being that presidents try to boost growth to bolster their re-election prospects. This cycle, however, is setting up to be different. Economically, we think growth has peaked in the second year of the cycle (2018) due to the stimulative effect of tax reform. This also may have front-ended the stock market returns, which the 22% total return of the S&P 500 Index in the ﬁrst year of the cycle may demonstrate. As we expect growth to slow in the third year, we wouldn’t expect the typical cycle of market returns to repeat.

Finally, we present the views of our equity research department (ﬁrst presented in our Midterm Exam report on October 24) about the expected impact of the election on the outlook for the various sectors of the economy and stock market. In her election night speech, House Minority Leader Nancy Pelosi stressed three Democratic priorities: drug price controls, infrastructure and campaign ﬁnance reform. The latter two are routine political promises that never seem to go anywhere, while drug price controls may ﬁnd an interested president but a skeptical Congress. 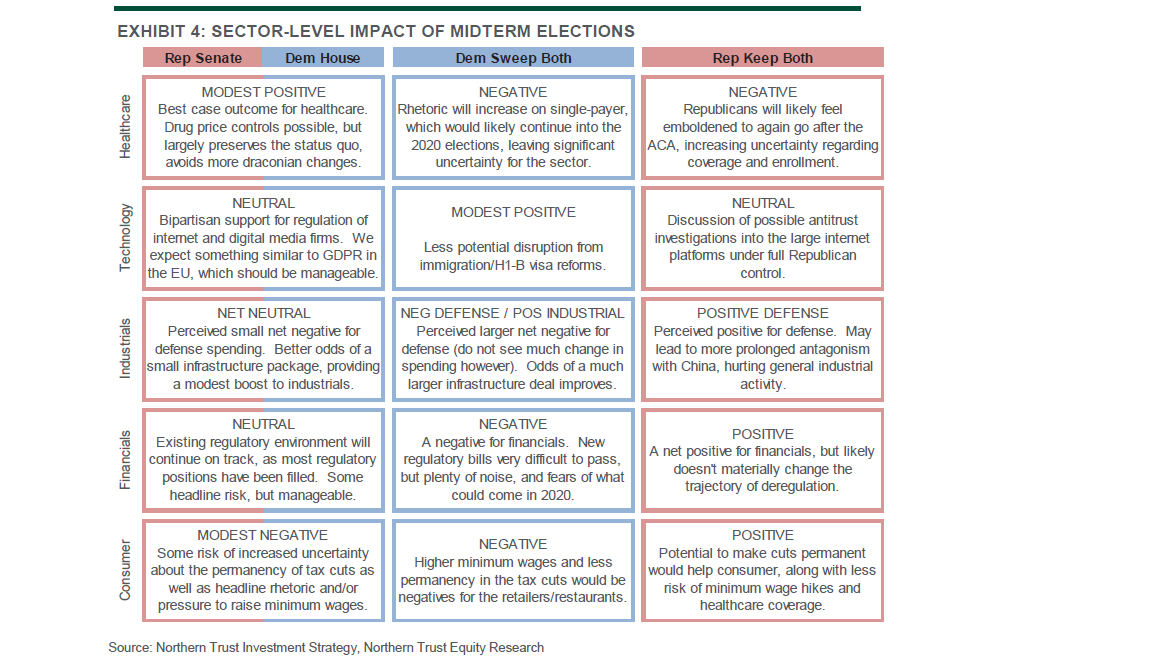 IMPORTANT INFORMATION: This material is for informational purposes only and cannot be relied upon for tax purposes, does not constitute investment advice or a recommendation to buy or sell any security. The views expressed are those of the author(s) as of the date noted and not necessarily of the Corporation and are subject to change based on market or other conditions without notice. Information is conﬁdential and may not be duplicated in any form or disseminated without the prior consent of Northern Trust. Northern Trust and its afﬁliates may have positions in, and may effect transactions in, the markets, contracts and related investments described herein, which positions and transactions may be in addition to, or different from, those taken in connection with the investments described herein. All material has been obtained from sources believed to be reliable, but the accuracy, completeness and interpretation cannot be guaranteed. Information contained herein is current as of the date appearing in this material only and is subject to change without notice.
PAST PERFORMANCE IS NOT INDICATIVE OF FUTURE RESULTS. Periods greater than one year are annualized except where indicated. Returns of the indexes also do not typically reﬂ ect the deduction of investment management fees, trading costs or other expenses. It is not possible to invest directly in an index. Indexes are the property of their respective owners, all rights reserved.
No bank guarantee | May lose value | NOT FDIC INSURED

C&N Library
A Collection of Articles from C&N Experts

Philip is the Trust Investment Manager and oversees the investment unit of the Trust and Financial Management Group. His responsibilities include the oversight of investment strategies, investment analysis and manager selections. Philip joined C&N in 2000. He was previously responsible for the delivery of C&N’s financial services, including the sales and service of Trust, Brokerage and Insurance services. He also retains administration duties for client accounts.

Prior to joining C&N, Philip’s experience at C&N, Prough Insurance Agency and Parente Randolph provided him with valuable skills and insight to lead his team to success at C&N. Philip’s driving philosophy is that “providing a deep, knowledgeable team gives our clients assurance that we have a sustainable support network to meet their changing financial needs. But it’s our personal service that demonstrates our clients will always be our primary focus.”

Philip is an honors graduate from Lycoming College, receiving his Bachelor's of Arts degree in Accounting. He received his Master of Business Administration from Colorado State University in 2012 and has held the designation of Certified Financial Planner® practitioner since 2003. He also holds various securities and insurance licenses.