Citizens & Northern Corporation is a bank holding company with assets exceeding $2.4 billion and is headquartered in Wellsboro, PA. Banking and lending services are provided by its subsidiary, C&N, from 30 banking and loan production offices in Bradford, Cameron, Lycoming, McKean, Potter, Sullivan, Tioga, Bucks, York, Lancaster and Chester Counties in Pennsylvania and Steuben and Chemung Counties in New York.

Founded in 1864 as The First National Bank of Wellsborough, C&N is a full-service financial institution with offices in the ten counties listed above. From the very beginning, C&N has been committed to the businesses and families in our local communities. C&N has been instrumental in helping those communities thrive by providing needed funding for growth and contributing to local charities which share C&N’s mission to enhance the lives of our neighbors in the communities we serve.

C&N continued to bolster its presence in Southeastern Pennsylvania by merging with Covenant Bank in August of 2020. The addition of Covenant Bank included a second branch in Doylestown and a branch in Paoli in Chester County.

The Annual Meeting of shareholders is held each April. All shareholders entitled to vote at the meeting will receive a proxy statement and card prior to the meeting. The proxy materials will contain the business to be considered and a notice of the time and place of the meeting. 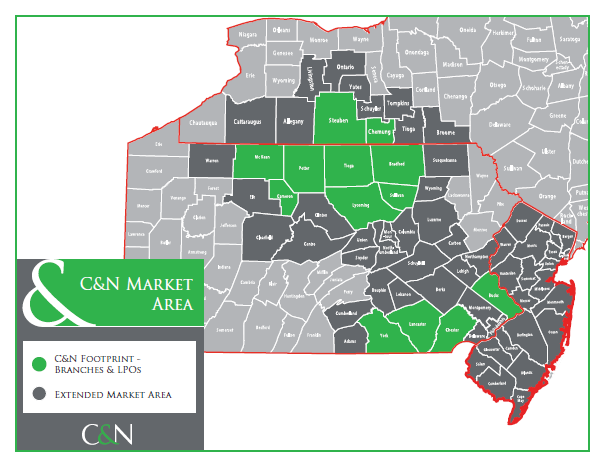 We're dedicated to our community
Learn about Giving Back, Giving Together
C&N Library
A Collection of Articles from C&N Experts